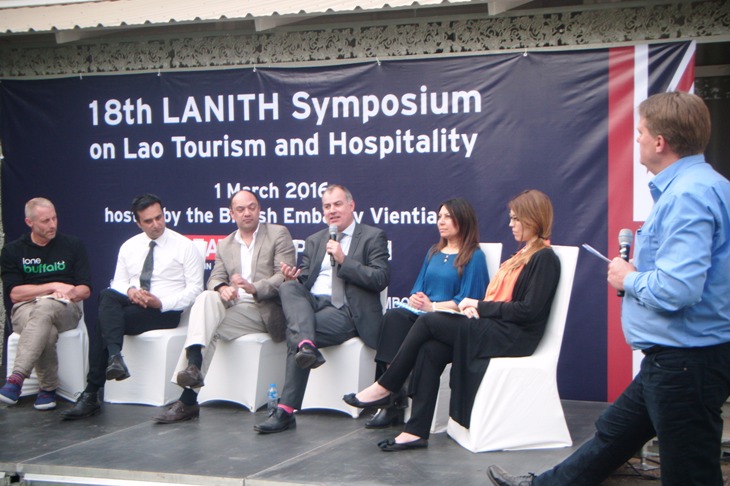 Lord Puttnam Tackles Lao Tourism Challenges
Oscar-winning producer Lord Puttnam was recently walking along Luang Prabang’s streets. He notices a fine-looking four-storey hotel topped with a terrace. He hikes up the stairs and takes in the view. He then asks the staff if he can order a drink. The smiling worker replies, “Yes sir, on the first floor.”

Lord Puttnam’s anecdote kicked off his keynote address at the 18th Lanith Symposium on the challenges and barriers in growing Lao tourism. Lord Puttnam has been coming to Laos for 30 years, and considers himself, “A real friend of Laos,” but also a “critical friend.” He is currently the UK Prime Minister’s Trade & Cultural Envoy to Vietnam, Laos, and Cambodia.

He ended his Luang Prabang story to the 70-plus attendees at the event, held at the British Embassy in Vientiane, saying the experience shows the “half-shaked attitude” of many Lao tourism and hospitality staff.

He confronted the confusing arrival experience. “It’s like entering the Third Word,” compared to its neighbors, said the producer of the classic film, “Midnight Express”. “The visa process in Laos is cumbersome. It’s the reverse of nice.”

He referred to the well-worn “Thai smile”, and asked, “Can we develop Lao tourism without losing its charm?” In Laos, Lord Puttnam sees a “discontinuity in development”.

He warned about Lao tourism’s reliance on donor funding. “Laos needs to unhook itself from donors… Donor dollars are stretched in favor of crisis areas. It’s a struggle to make a case for the tourism and hospitality industry.”

Lord Puttnam addressed Laos’ tendency to place too much weight on arrival figures. “Arrival numbers are only half the story…Laos needs to add value to this statistic…What is certain is Laos needs more tourists who spend more money.”

He suggested boosting value with more creative products. “This country is blessed with the Mekong,” Lord Puttnam said. He noted Laos’ river cruise offerings and itineraries are limited. He said the traditional transportation boats and upscale vessels may suit some visitors. However, others want smaller boats offering niche experiences and charters, “but this doesn’t exist in Laos.”

He stressed Laos must deliver an authentic experience and instill a desire to return.

“Tourism is about memories. This is what tourists take home,” he said. “Laos can provide these memories.” 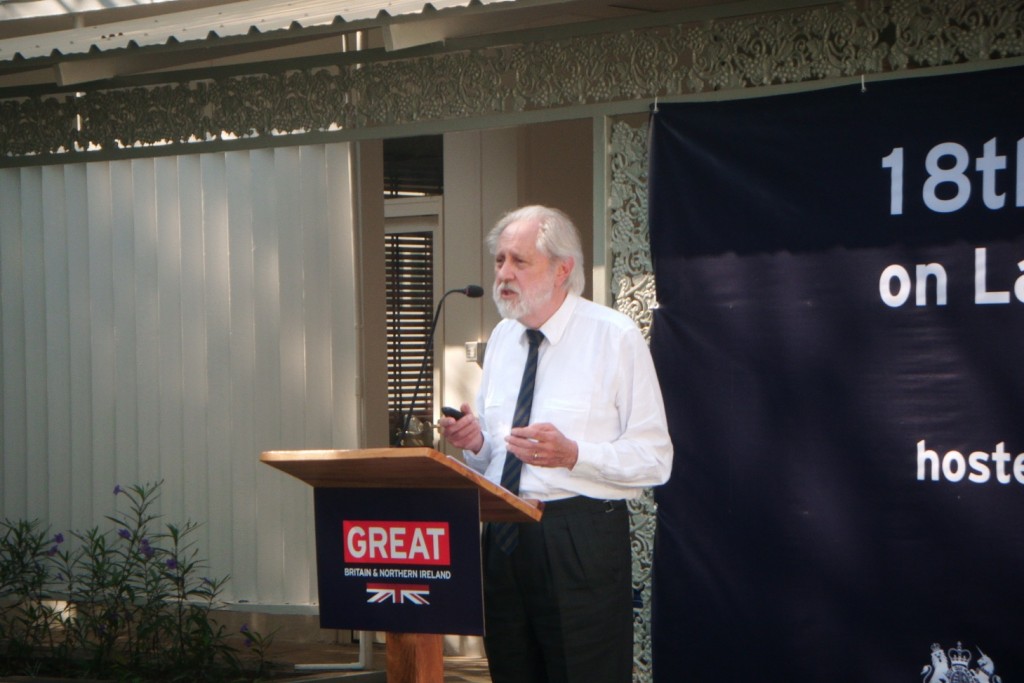 Hospitality plays a large role in positive memories, but, “Restaurants in Laos face challenges,” Lord Puttnam said. He noticed some eateries serve international dishes, but waiters don’t know English. “It’s a topsy-turvy relationship.” He added that a restaurant can display a large gap between good and bad. The décor may be nice, but the menu doesn’t live up to the atmosphere, and the food is often “skuzzy.”

Lord Puttnam stated that getting a qualified workforce requires a strategy.

“Talent is scarce, but it is a global asset. Laos wants to be talented, but there is a war for talent.”

Oliver Horn is battling in the war for talent. He is the general manager for Vientiane’s soon-to-open Crowne Plaza of the InterContinental Hotel Group (IHG). He described his hunt for Lao staff, “We want to fill positions with local talent, but there is a small pool to choose from that meets IHG standards.”

He added, “We’re trying to find the jewels…(but) we can’t even find department heads, so have to go with expats.” He noted that for every 100 interviews, the hotel hires 10. “Usually, we hire three out of four. This is a big challenge.” 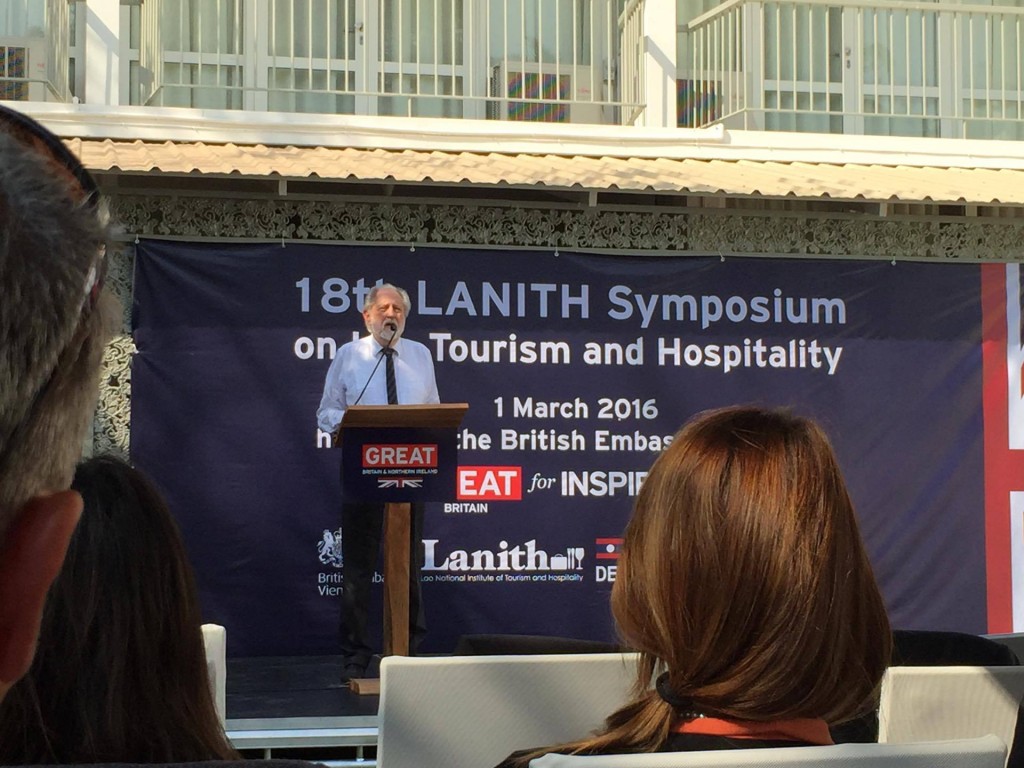 When seeking Lao talent, Mr Horn said IHG mostly looks for basic English skills and the proper attitude. “We have training vouchers…Development agencies provide a host of training projects, but they tend to target the rural poor.” He said attention must focus on differentiating the need for talent in popular destinations and remote villages.

He added, “Everyone is trying to bite into the same cake, but we need a larger cake. How can we make a bigger cake?”

To build the workforce, Mr Horn suggested an image campaign that shows the exciting side of hospitality. He recommended using success stories to recruit talent. “Family-run properties don’t understand human capital development.” He added that students question why they should choose a career in hospitality over one in another field.

British Ambassador to Lao PDR Hugh Evans pointed to Lanith (Lao National Institute of Tourism and Hospitality) as part of the solution, calling it, “One of the world’s centers of excellence for tourism development.” 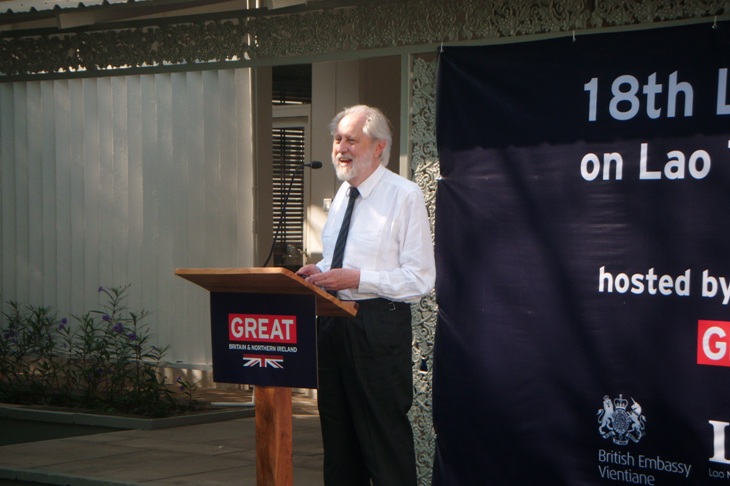 He said, “The world is becoming a similar place,” but visitors still want “to feel” an authentic experience.

A successful campaign must make people want to go. They are seeking personal adventures and true interactions with locals. “Packages don’t deliver this unique experience.”

Mr Welsh said, “What can Laos do to leverage someone else’s budget? Use digital media. Make the audience work for you.” He added Laos should leverage the “I’ve been there and you haven’t” mind-set. Aneil Bedi, a partner at M&C Saatchi cautioned.

Dr Hannaa Osman from the University of Bournemouth agreed.

“Luang Prabang has a story to tell…It’s all about the story…I want to know who made and developed things like crafts. Where is the story? People take pride in being part of the story, and they have a beautiful story to tell.”

Regarding marketing responsibility, Mr Bedi said, “The Lao government should be responsible for raising awareness in the country, and the private sector’s job is to find the market.”

He added that calculating the expected return on investment for marketing expenses “is guesswork, but $25 in tourism revenue for every dollar spent is what to shoot for.”

Lanith Chief Technical Advisor Peter Semone closed the 18th Lanith Symposium, stating, “We had our first in 2010, and the event has gone far beyond our expectations. This could be my last one, but over the years we’ve touched on many topics and had many excellent speakers. We’ve had great interaction and positive outcomes. The Lanith Symposia is all about participation and coming up with new ideas.” 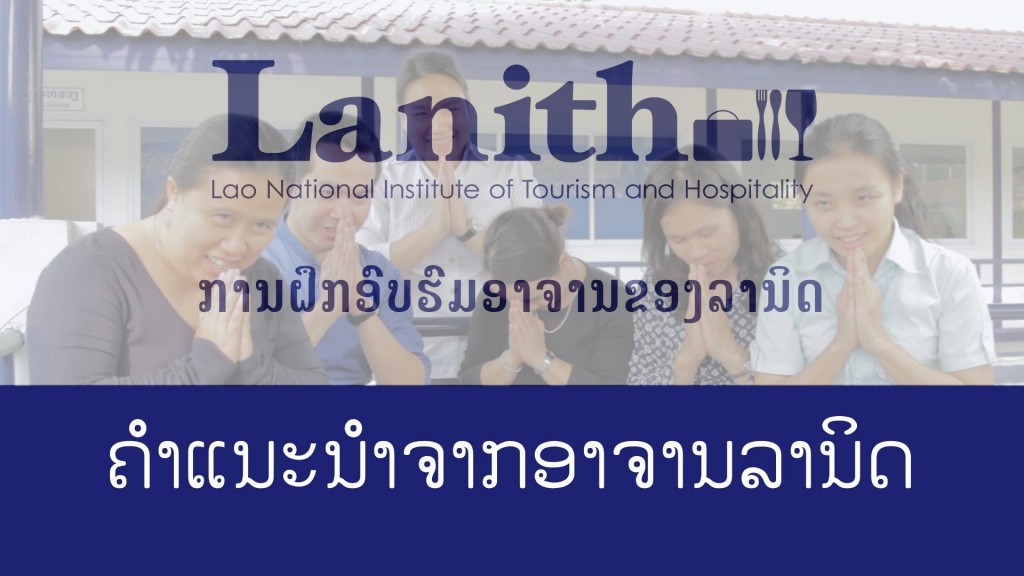 Published with permission from Bernie Rosenbloom