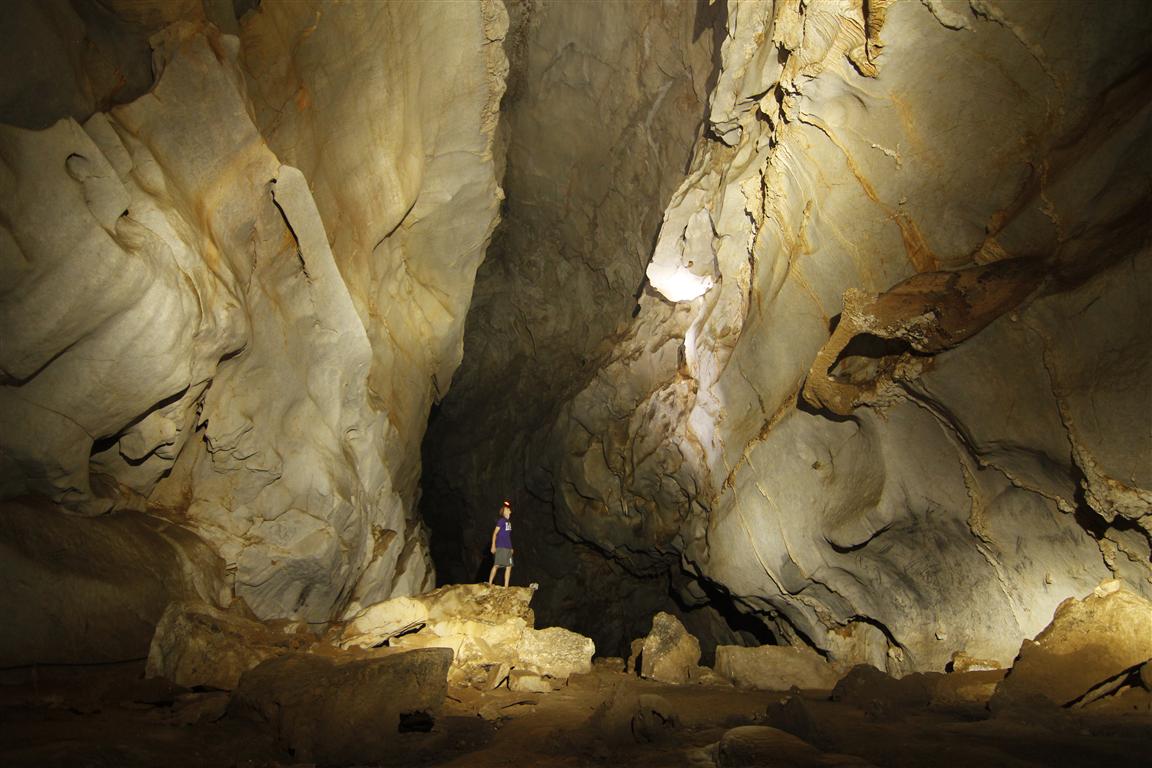 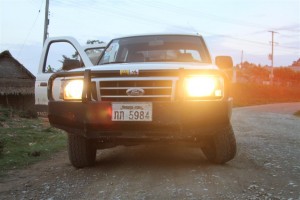 Chom Ong cave in northern Laos ranks as the 2nd longest cave in and the 9th longest in whole South East Asia!! The typical passage dimension is 20-25 m width and 20-30 m height. There are two overlaying passages, a river and a fossil passage, which are linked at one huge hall with 100 m length, 30 m width and ceiling heights of 30-50 m. This stunnning Lao cave is a “trough cave” and the full traverse would take about 5 hours with additional 1 and 3 hours respectively return walking time to Chom Ong village! 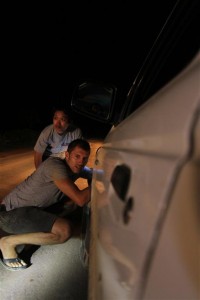 Every great Laos adventure has obstacles, and there was no exceptions with our weekend expedition to the Chom Ong cave, the second largest cave system in Laos just north of Oudomxay. We went up with a group of five people on a survey to explore the cave.  We took the Tiger Trail truck, which has taken many journeys across the rugged terrain of northern Laos, little did we know that the truck had a few surprises.

We were making good time trying to get to Oudomxay Friday night, but as we came over the pass the wheel suddenly spun to the right for no apparent reason.  We got out of the car to see what was happening and to our surprise the front left wheel was bent at a sharp angle.  Our hearts dropped as we were in a small village and thought that this would surely be the end of our trip.  We got out the jack and tried to figure out what happened.  It wasn’t until we had given up hope, emptied the truck to start hitch hiking, when Phouthone, a senior Tiger Trail staff member, saw what caused the wheel to bend… 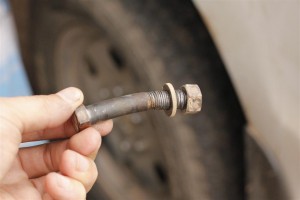 There were two bolts holding the wheels swing arm in place and one of those bolts had fallen out.  We couldn’t find the nut, and the bolt was barely hanging to the joint.  We had one last burst of inspiration, thinking that we might be able to find a nut and get the bolt back in place.  We walked through the village and found a small motorbike mechanic shop who dug through several boxes and miraculously pulled out a matching nut.  He gave us some tools and off we went to the car.  After an hour of painstakingly slow adjustments and hand tightening with a small wrench we had the bolt back in place. 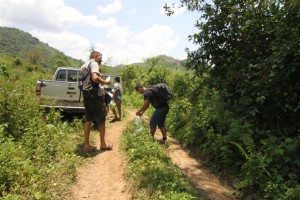 The car was working again!  We drove slowly the rest of the way to Oudomxay stopping to check the bolt which was slowly slipping as we didn’t have the proper tool to really tighten it down.  Late that night we made it to Oudomxay, found a small guesthouse and went straight to sleep.

The next morning we got up early took the car to a shop where they replaced both bolts as they were both in bad shape.  After that we were confident that the truck was in good working order.  So we got some food, met our local guide and we were on our way. 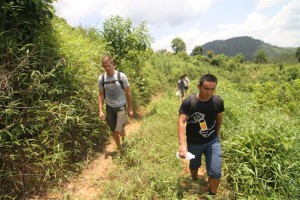 As we drove into the country side we were surprised to see round sloped hills thinking, “how could there possibly be a massive cave out there”.  The roads were quite good all the way to Chom Ong village, and our guide told us that we could even drive all the way to the cave entrance since the truck had 4 wheel drive.  We were all excited to get to the cave and happy to hear that we didn’t need to hike as the sun was blistering hot and we already had a late start due to car issue. 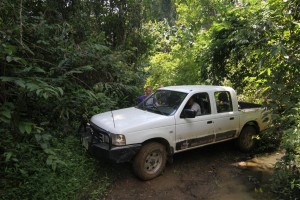 Unfortunately the road that went to the cave turned into a 4X4 rally track, and our little truck was not up for this challenge.  So we had to turn the truck around on this narrow trail and then hike the rest of the way to the cave.

INSIDE THE CHOM ONG CAVE,
18 KM DARKNESS AND BEAUTY  IN LAOS

When we got to the cave our guide took us to the lower entrance where the river exits the cave.  This is one of the most stunning parts of the entire cave, as the light from outside reflects off the river and paints the inside of the walls with an orange glow. 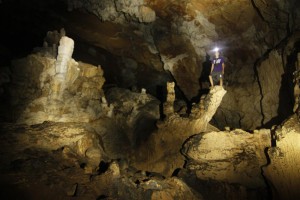 We walked up the river a few hundred meters and then turned around to go to the main entrance which leads to 18+ km of tunnels. The cave almost immediately opened to massive cathedral-like chambers nearly 50 meters high.  The cave is still rarely visited by most tourists coming to Laos, but its formations are stunning and the immensity of size is mind boggling. 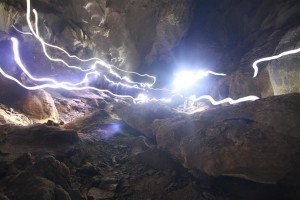 We spent the better part of the day wandering through the cave.  Our guide took us to the famous spot where a smaller chamber suddenly drops 18 meters to the underground river that flows through Chom Ong.  As we approached we heard the steady roar of water before we saw where it was coming from.  The photo below shows a few of us laying on the edge of this drop off. 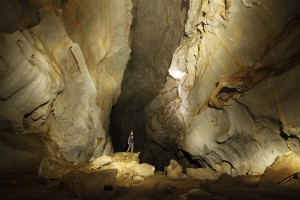 We then continued deeper into the main chambers of the cave, going further than the regular tour allows and saw several more large chambers full of unique formations.  The exploration of this cave was first conducted in 2009 and it is now verified to have 18.4 km of passage ways and its formations are noted as some of the most beautiful in the region. 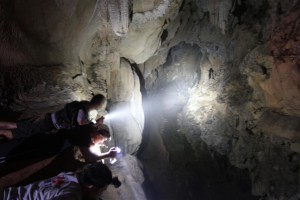 It was finally time to return to the surface in order to make it back to the village before dark. We headed back to Chom Ong village and after setting down our things, we discovered a nice local shop that was selling ice cold beer and some good snacks.  We also found out that the village had killed a cow that day, which meant there was fresh beef on the menu. We were all exhausted and after a fantastic meal we were all ready for bed. 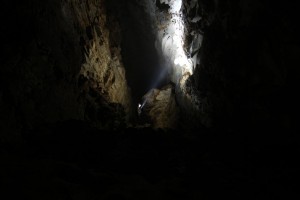 We had an amazing adventure in northern Laos! The cave and the village of Chom Ong are both stunning examples of the mysteries and surprises that Laos has to offer any adventurous traveler. If you are willing to make the journey to these places you will not be disappointed.

Booking and tour inquires, please send to our local team in Luang Prabang. 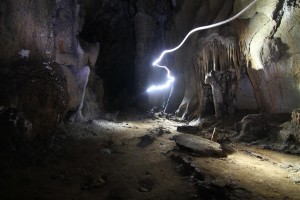 The Chom Ong cave near Udomxay is not only one of the longest caves in South East Asia but also by opinion of the cave exploration team one of the most beautiful and interesting caves in the entire region. With its two very different passages it has a diversity that is very rare. The Chom Ong cave impresses with several huge stalacmite and stalactite formations as well as vast glittering parts, sinther basins but also geologically interesting parts (shields, floe calcite etc.). It is said that Chom Ong cave is the most beautiful and diversified cave in Lao PDR. 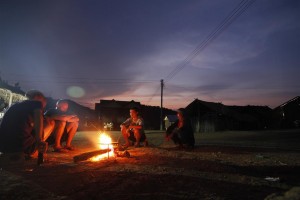