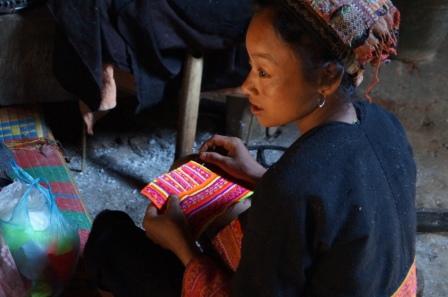 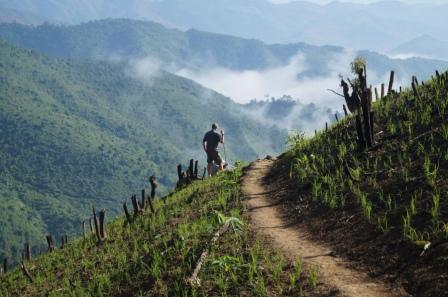 The question has to be asked: Is the drive and all the ‘roughing it’ worth it?  I’d have to answer an emphatic YES!  The opportunity to not only witness some of the Laos’ most stunning mountain scenery, but to integrate into a simple home in a remote village amongst people whose daily lives and cultural beliefs are so far from my own experiences, was a definite once in a lifetime moment. 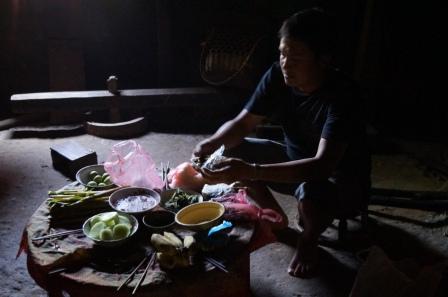 The Tiger Trail Akha Culture Experience is a joint project between villages, governmental tourism departments, NGO’s and the villagers themselves to share the economic and development benefits of tourism in a small scale, well-managed, sustainable way.  Guests have a choice of a 4 – 7 day program which includes travel to/from Luang Prabang (long, but the views are amazing!), and some time spent in a town in northern Phongsali Province. 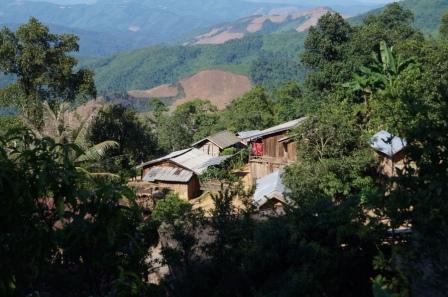 Short on time, we elected to go for 4 days, and it was a highlight of my year to date!   It’s rice planting season now, and the weather is hot, and the village hard at work, but we were welcomed openly into the village chief’s home, alongside a newborn 3 day old baby, fully kitted out in the traditional costume the Akha are so renowned for.

Still living a traditional lifestyle, the Lao Akha homes lack electricity, private bathrooms or a kitchen in the western sense, but these things are made up for in natural temperature control, simple, tasty and plentiful meals, comfortable bedding and free-flowing local whisky!

Visitors will experience something different every time on this program as the activities and routines will vary according to the seasonal lifestyle of the ethnic Akha.  We enjoyed a welcome massage, time spent weeding and planting in the rice fields (not for those shy of hard work!), hunting for bamboo shoots and banana flowers, and basket weaving.  There are opportunities for some incredible trekking (in addition to the necessary trek in and out of the isolated village) in truly breathtaking scenery. 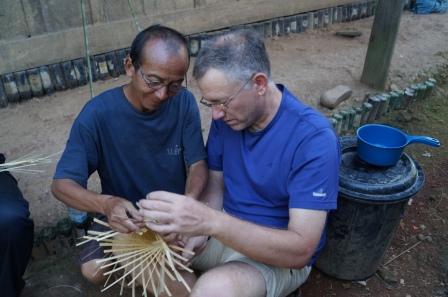 Showering was an interesting experience due to a lack of privacy generally and the inevitable interest of the entire village in the fair-skinned ‘falang’ come to visit!  The one water tap in the Akha community is a great meeting place of old and young, women and men, where daily chores are conducted, along with bathing and some respite from the heat. 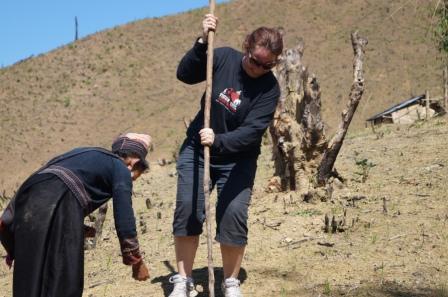 A truly treasured memory was time spent hanging around together outside the house, talking with the village chief’s father about Akha customs and beliefs and sharing the differences with my own societal norms…my separation (without divorce) from my husband was a source of much disbelief!  Only a few villagers speak Lao but through translation (with our Tiger Trail guide) we could share stories.  However it was our laughter and smiles that proved universal and came often on both sides. 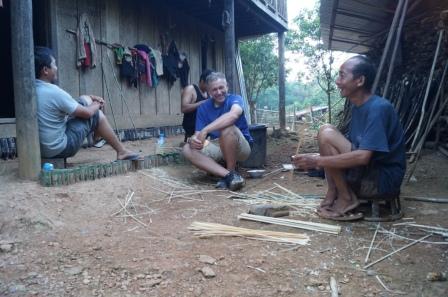 Our time in the Lao Akha village ended with a traditional animist blessing ceremony, accompanied by a sacrificial chicken and plenty of whisky to wish the travelers and new friends farewell.  It was a genuinely unforgettable trip, and one I would recommend to people wanting to see another side of fascinating Laos. 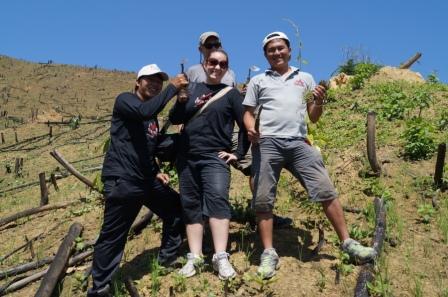 Akha Facts for Laos,
learning about the Akha in Laos

[learn_more caption=”LEARN MORE ABOUT THE AKHA IN LAOS – CLCK TO OPEN”] Scholars agree that the Akha tribe originated in China; they disagree, however, about whether the original homeland was the Tibetan borderlands, as the Akha claim in their story telling. The historically documented existence of relations with the Shan people and the prince of Kengtung indicates that Akha were in eastern Burma as early as the 1860s. They first entered Thailand and later also Laos from Burma at the turn of this century, many having fled the decades long civil war in Burma over the green borders of northern Laos along the Mekong region between Burma and Laos. Traditionally, Akha villages in Laos are situated at a high altitude and their locations are chosen for the qualities of the surrounding areas. The territory must be forested, favorable to rice, corn and poppy growing and there must also be grassy pastures for cows. An agreement with the spirit of the land is necessary before the settlement of the village can take place. An Akha week is 12 days long; for every activity of the village, there are favorable and unfavorable days. There is also a selection according to the day of the week, the month and the period of the year. he Akha villages are traditionally constructed of logs, bamboo, and thatch and are of two types; “low house,” built on the ground, and “high house,” built on stilts. The semi-nomadic Akha, at least those who have not been moved onto permanent village sites in Laos, do not typically build these houses as permanent residences and will often move their villages. Some say that this gives the dwellings a deceptively fragile and flimsy appearance, although they are built quite well, and the design has been tested for generations. The entrances to all Akha villages are fitted with a wooden gate adorned with elaborate carvings on both sides depicting imagery of men and women. This feature is known as a ‘spirit gate’ and it marks the division between the inside of the village, the domain of man and domesticated animals, and the outside, the realm of spirits and wildlife. The gates function to ward off evil spirits as well as to entice favorable ones. The carvings can also be seen on the roofs of the villager’s houses as a second measure against the control of the flow of spirit. The huts are divided by gender with specific areas for men as well as a mutually shared space. This divide is said to mimic the function of the gate Akha people believe in ancestors’ spirits that guide humans and they believe that spirits dominate every resource. Every “upper” spirit is helped by intermediate spirits to which only shamans, and very religious people can have contact. Lower spirits are accessible to all people. Spirits manage the attitudes and behaviours of the Akha; they are like inspectors of all daily life. According to the “Akhazan” code, every offence must be punished to calm down the angry spirit and the punishment must benefit the whole village. You can learn more on the Akha under: http://en.wikipedia.org/wiki/Akha_people[/learn_more]

Never has the choice been so drastic for the Akha People of northern Laos. For centuries they preserved their culture in remote mountain villages. Now the pressures of modern civilization are closing in. More and more abandon their traditional way of life and settle in the lowlands.
Through glimpses into Akha life this film explores their struggle – between the hope of a better future and a fading cultural identity.