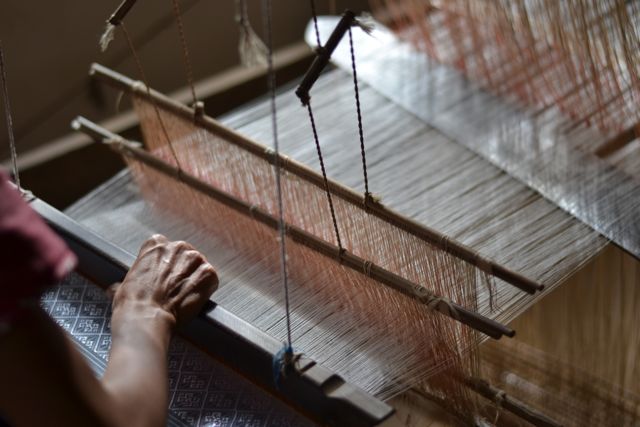 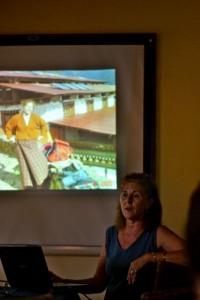 The Traditional Arts and Ethnology Center (TAEC) in Luang Prabang recently hosted a talk by renowned textile conservator Julia M. Brennan, founder and owner of Caring for Textiles, based in Washington, DC.  Ms. Brennan specializes in an exhaustive range of textile treatments, revitalizing iconic cultural pieces from around the globe, thus preserving cultural intricacies to bear witness for future generations.

Ms. Brennan took us on ‘A Spin Around the World’, focusing on highlights from her career.  We traveled to a Buddhist monastery nestled in the snowy peaks of Bhutan and the revitalization of a late eighteenth century ladri, or altar canopy.  The ladri was not merely a decorative piece, but a living history of Buddhism and specific to this mountain monastery.  A collaborative team of four monks and five museum workers tallied one thousand man hours over ten weeks in conservation tasks before the canopy was hoisted on shoulders and packed in snow drifts back to the monastery.  Other Bhutanese projects included conservation of the Raven Crown of the 3rd King of Bhutan and an eighteenth century Tibetan robe sporting silk on silk embroidery, mimicking that of the Buddha. 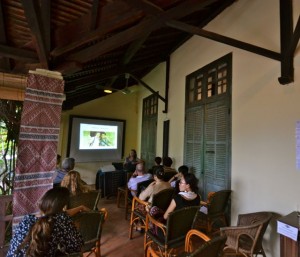 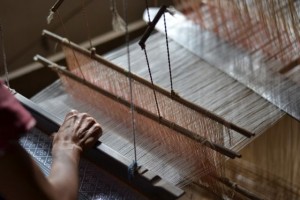 In a story of international preservation efforts we then traveled to Bangkok and restoration of a royal golden robe, originally gifted by King Rama V to the first and only foreign commander of the Thai Royal Navy, Danish Vice Admiral Andreas du Plessis de Richelieu.  The robe, of exquisite gold embroidery needlework and gold netting spent over one hundred years in a vault in Denmark before returning to Thailand in 2010.  Restored by Ms. Brennan and her team, it is now on public display.

We completed our world tour in the United States with the refurbishment and conservation of such iconic pieces of American history as the main flight suit worn by Howard Hughes, George Washington’s waistcoats, and Abraham Lincoln’s great coat which had been hanging over his chair at the time of his assassination.

Ms. Brennan has spent the last six years training a new generation of textile conservators in Thailand as well as collaborating in the establishment of the Queen Sirikit Museum of Textiles in Bangkok.

Fittingly, the talk took place in Le Patio Café at the Traditional Arts and Ethnology Center, thus we found ourselves surrounded by an exquisite representation of Lao textiles and culture.  TAEC is an essential stop in any visit to Luang Prabang, offering a unique, informative, and engaging look at Laos’ ethnic diversity.  TAEC offers permanent exhibits on Laos’ four most well know ethnic minority groups: Akha, Hmong, Kmhmu, and Tai Dam. 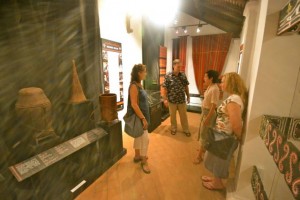 Currently there is a special exhibition on the Katu people inhabiting southern Laos and the central highlands of Vietnam.