GUEST BLOG: Trekking in Luang Prabang: The Most Fascinating Place I’ve Ever Been 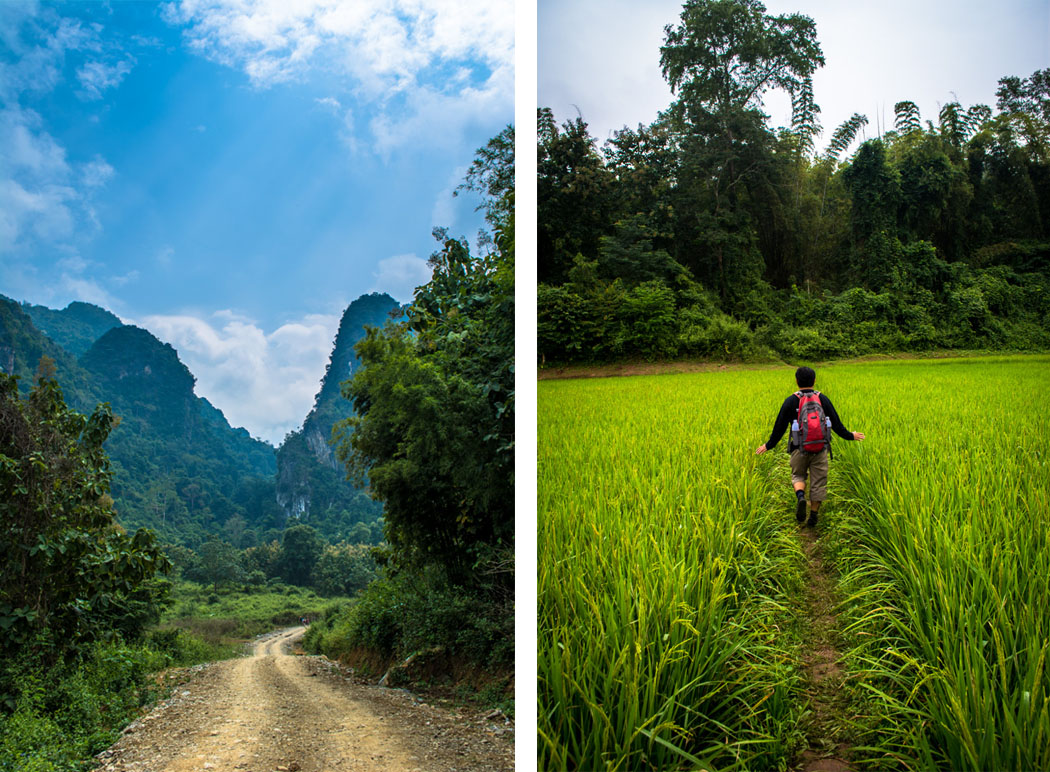 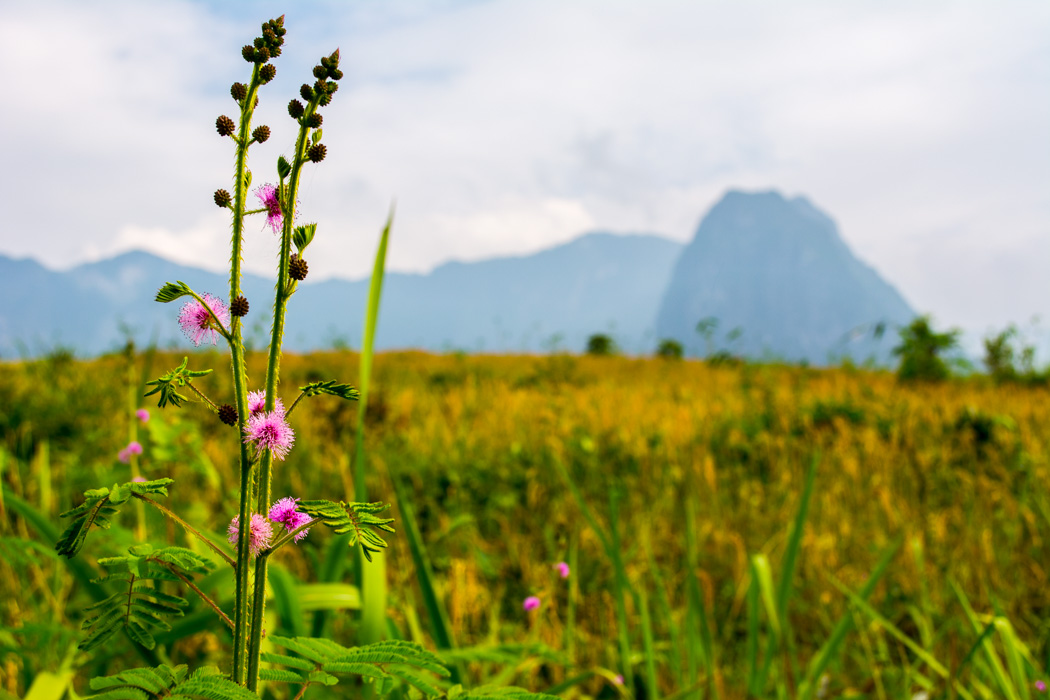 “Will there be chicken for dinner?,” one person asked.

“No,” our guide replied. “Chickens are very hard to catch.”

With those words of wisdom, I thought our village home stay was off to a great start.

The city of Luang Prabang serves as a great jumping off point for trekking to remote villages in the region – repeated every brochure, travel guide, or blog that we read. Because we were in fact in Luang Prabang, and because trekking (not hiking) to somewhere remote (not just far) sounded fairly badass we decided to give it a try.

Early the next morning, we met our guide (and a French couple also trekking with us) to take a truck to the beginning of the trail. We’d hike for 12km and then spend the night at a village.

Our guide had grown up in the mountains before his family moved into Luang Prabang. This was great because he was able to provide us with real insight into the everyday lives of the people we were passing. This was terrible because he clearly felt comfortable doing the kilometers of uphill climbs at a jog. We huffed and puffed through villages and spectacular views that changed faster than I could take pictures. 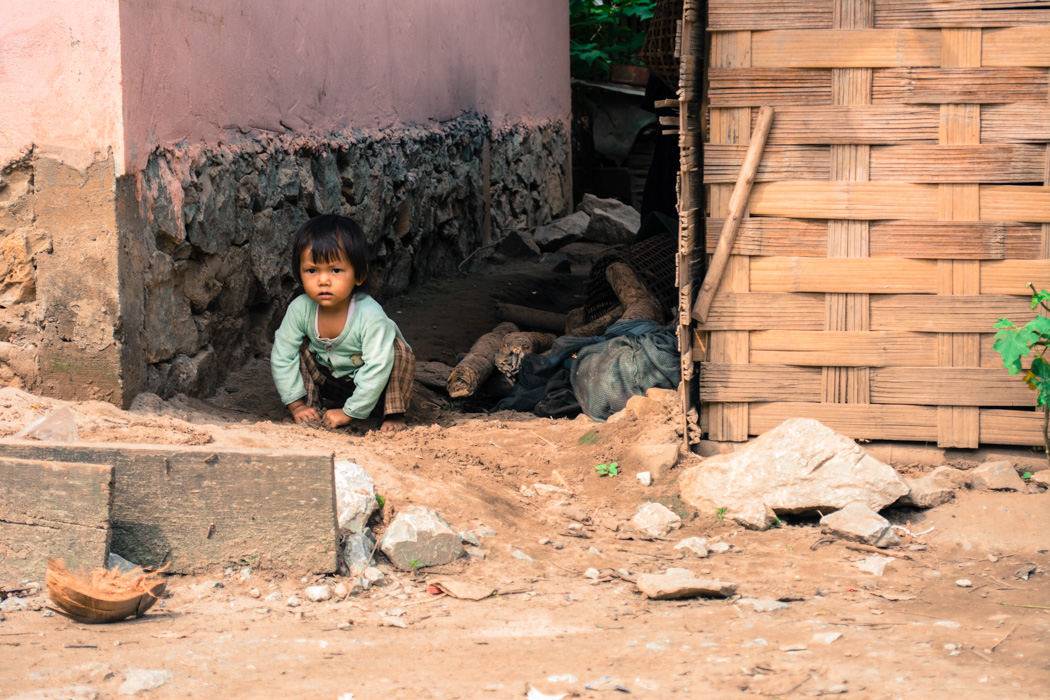 Yellow rice fields ended abruptly at steep mountain passes. Dense, steamy jungle prickled our skin with sweat before releasing us into an open valley surrounded by jagged karst formations. I had no idea Laos was so beautiful. I could hardly keep up with the scenery (or our guide).

We took a brief break for lunch in a tiny village with only six families by a small lake. 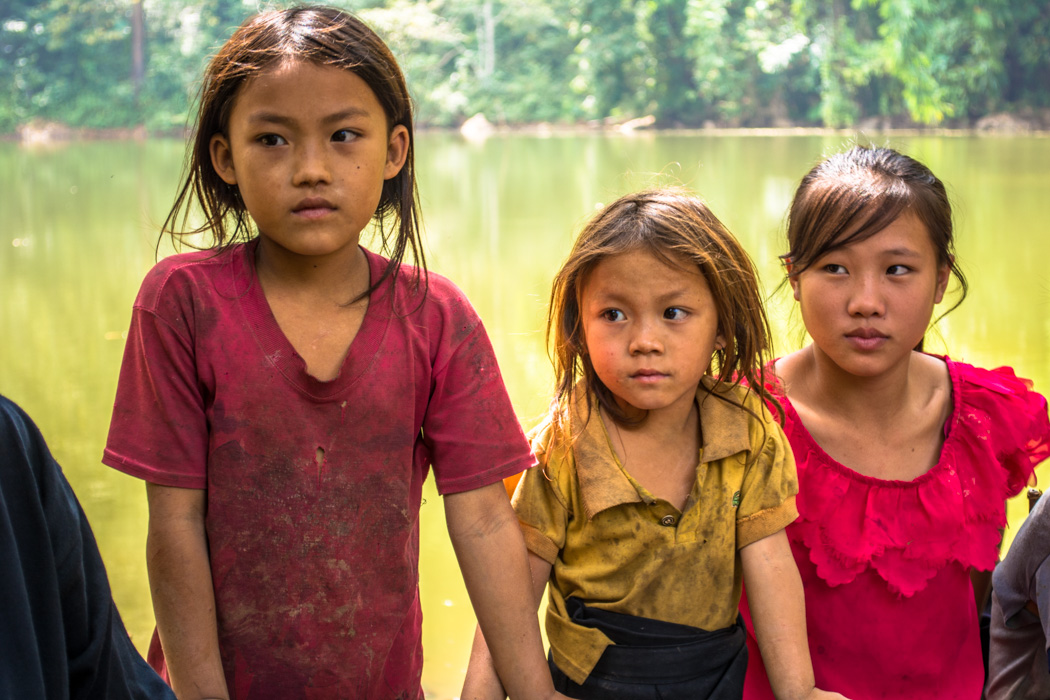 After three more hours of  trekking we finally arrived at our home stay. And I thought it was the most spectacular thing I’d ever seen (I say that with almost no hyperbole). 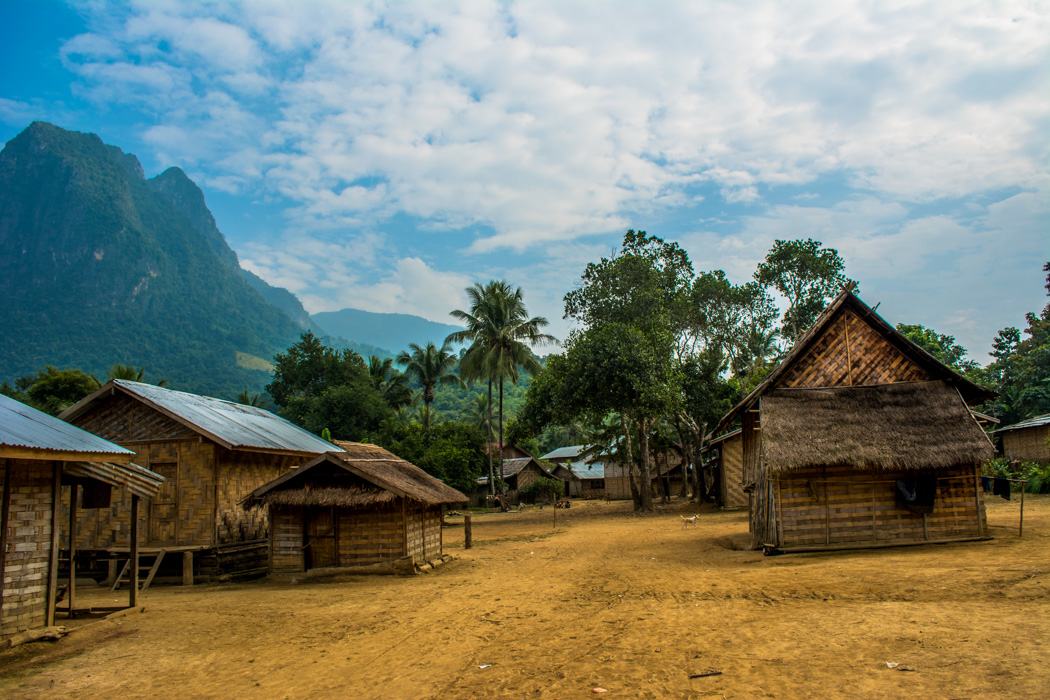 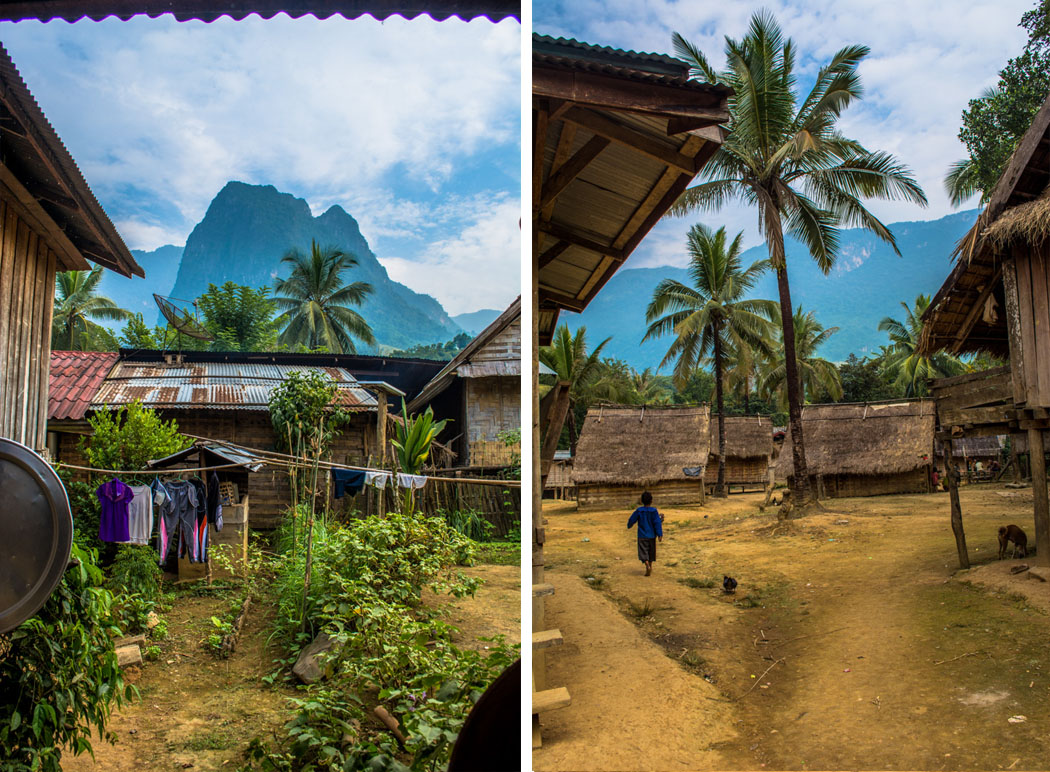 The town is set in a National Geographic-worthy valley, surrounded by mountains and palm trees. They have one spigot with running water where they communally bathe, and have electricity for only two hours a day. 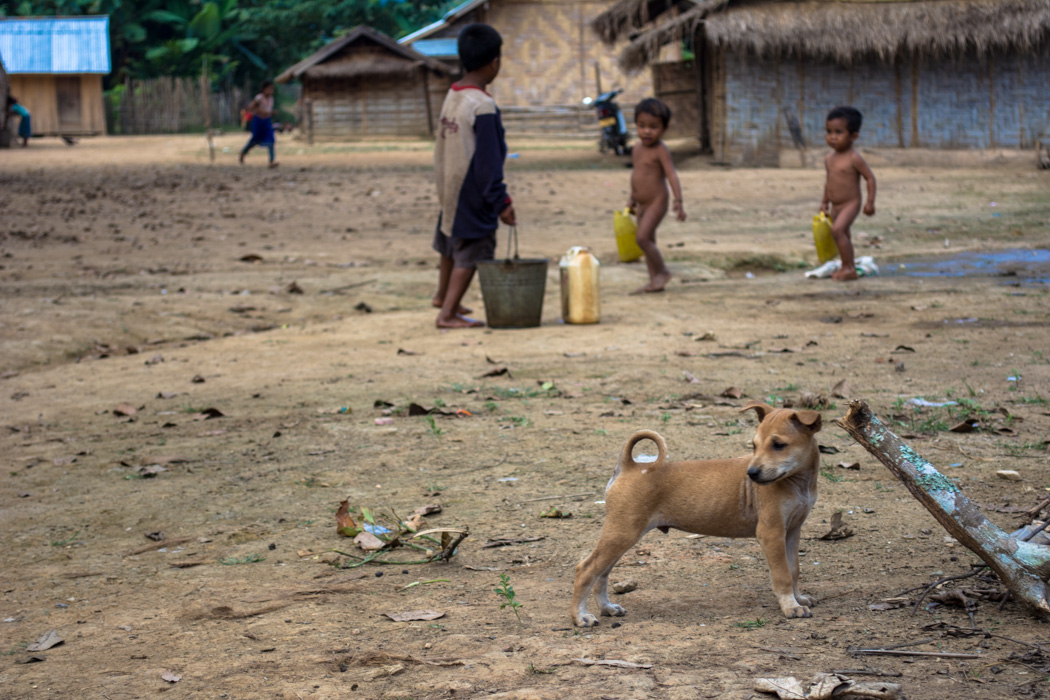 I felt a mixture of awe and awkward voyeurism. This was by far the most different way of life I’d ever encountered, but I didn’t know how to act given that we had no way to actually talk to them. So for awhile we just stood around gawking in our tennis shoes and baseball hats. 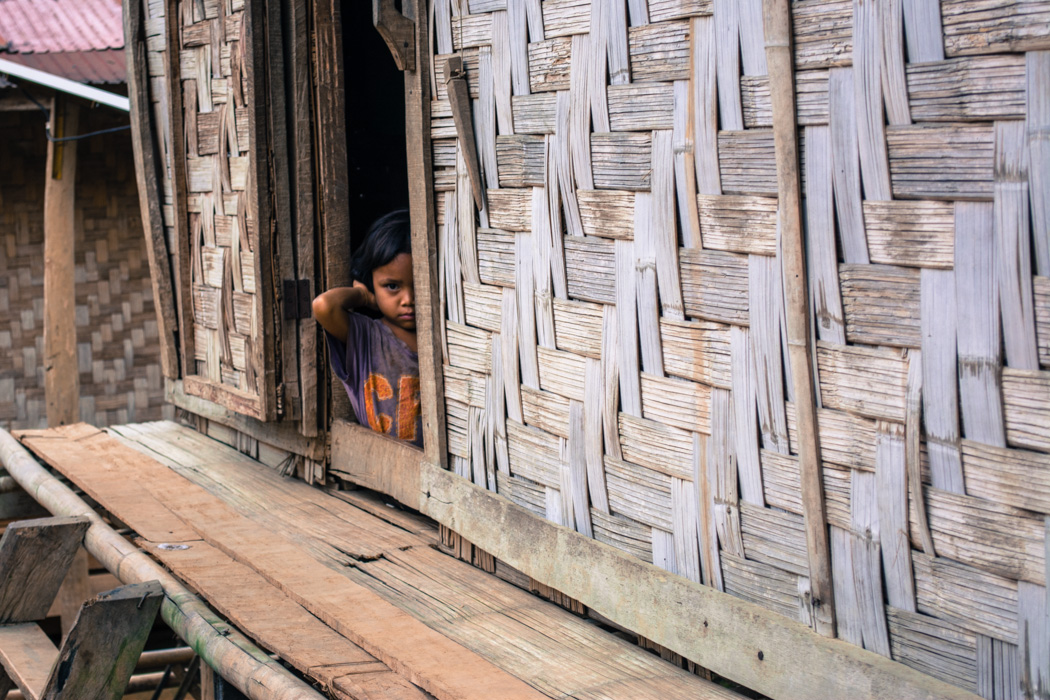 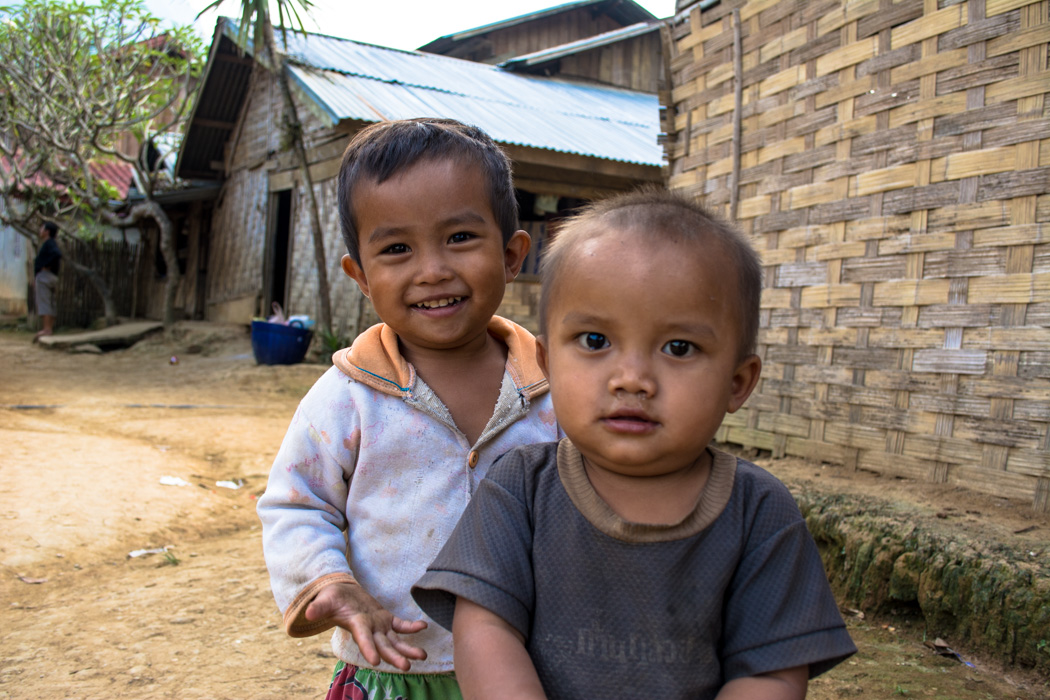 Eventually we moved to our own huts and took up gawking on that porch instead. As the sun set, dozens of women came back from working in the fields with giant bags of rice attached to their heads and backs (they start working as young as 8). A game that’s a blend of volleyball and soccer was played by some of the boys. 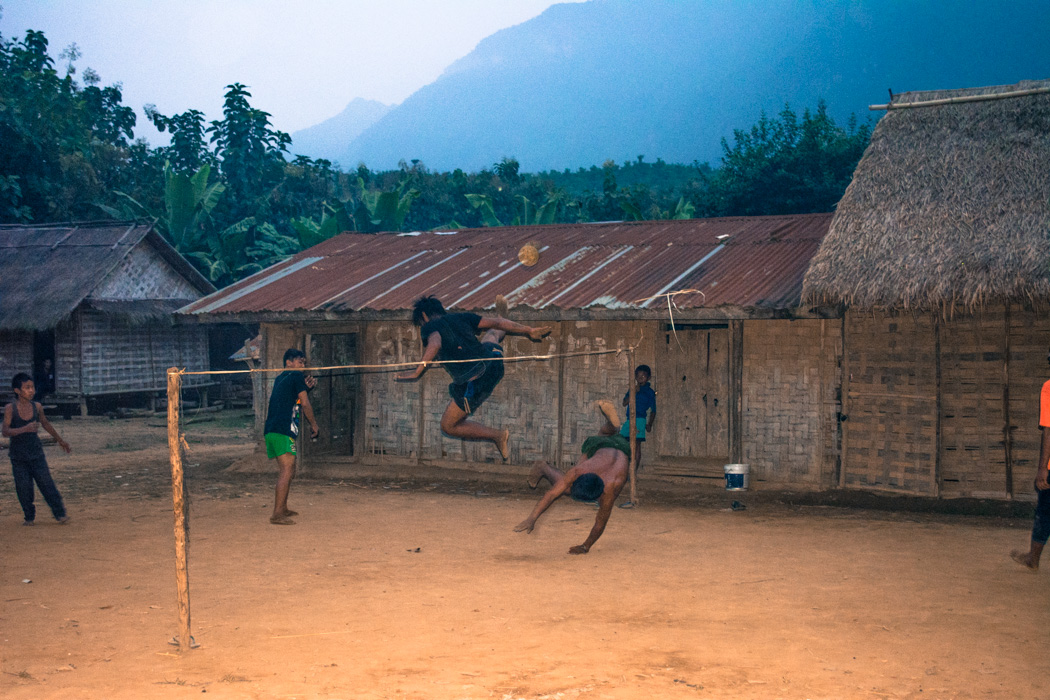 Searching for some way to connect, we ventured off our porch to walk around. We passed one family who was sitting around a table making bracelets. We shyly walked up to the door and smiled- which was our way of saying “Hi, nice to meet you! Can we make friendship bracelets too?”

One of the women nodded for us to come in. At that point we saw the old man chanting, a candle stuck into a large bowl of rice and money, and the bones of chicken. Hmm. Maybe not making friendship bracelets.

As we later found out, we’d wandered into a shaman ceremony (!). The woman was sick and they were doing a … something … to try to make her better. I have no idea the exact details, but it involved tying white strings onto the wrists of a baby and an older woman and then breaking the bones of the chicken. The shaman sang for awhile over a candle and then suddenly it was over. The chicken was cut up into pieces and served for dinner with the rice.

We weren’t sure what to do, so we quietly made our way out of the house, half-excited by what we’d just seen and half embarrassed that we’d made a total social faux-pas. Unable to find any other situations it would be totally inappropriate to intrude on, we retreated back to our hut for our own dinner. 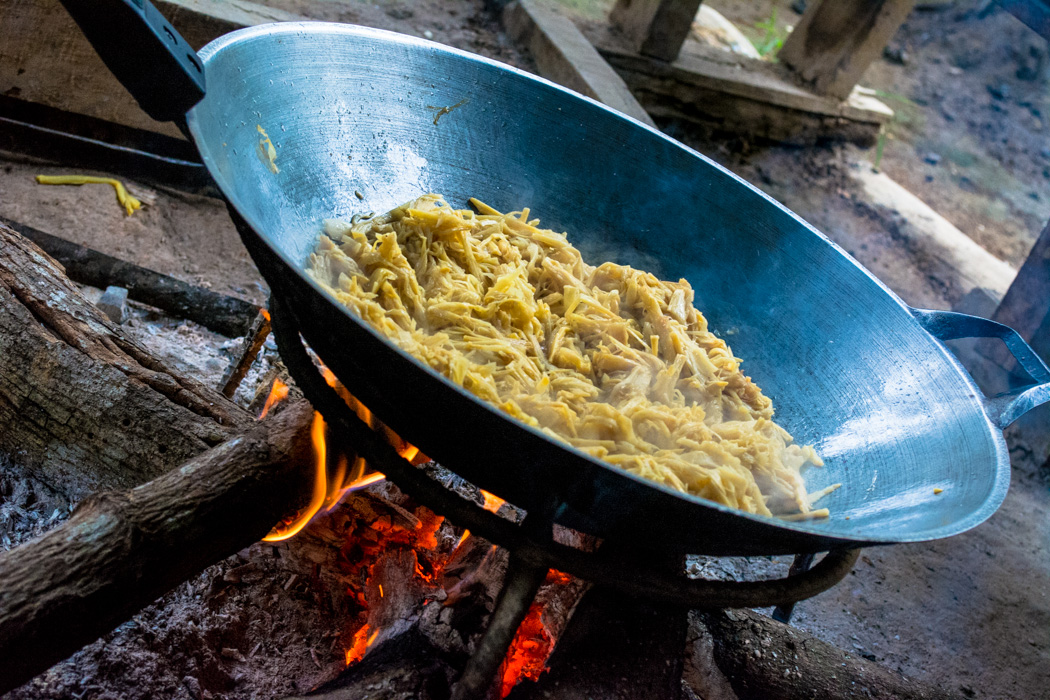 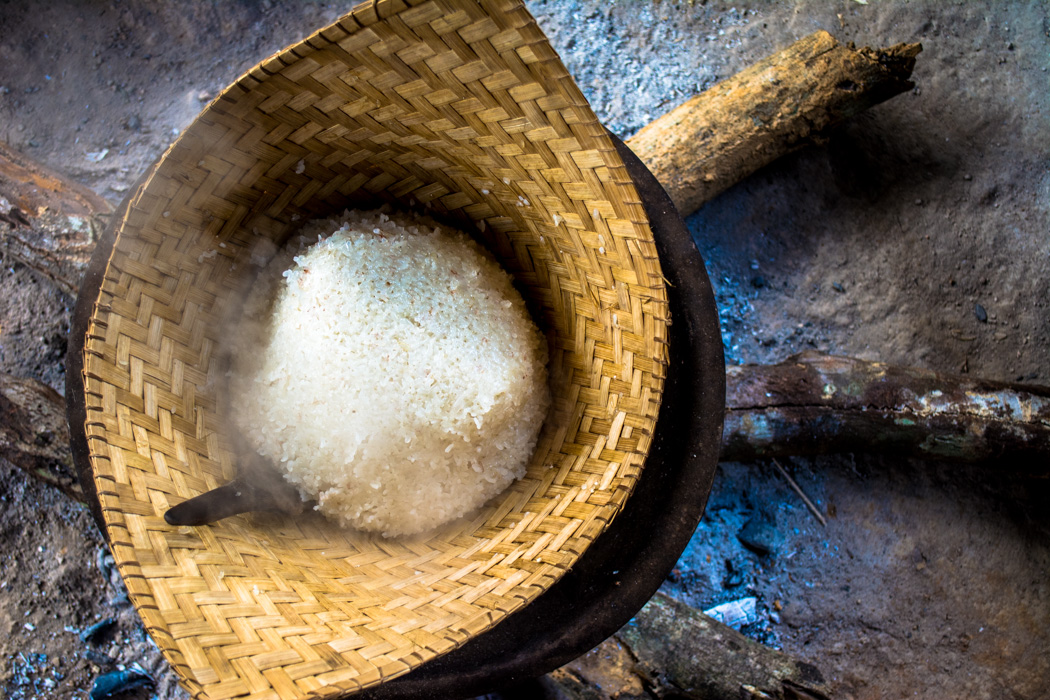 By 8pm we were thoroughly exhausted and fell asleep to the sounds of muffled voices coming from the only TV in a village of 600 people.

Eight hours and a half-dozen false alarms from the rooster later, we emerged groggily from our rooms to a breakfast of eggs, coffee, and warm sticky rice. After visiting the two room building where the kids go to school during the week, we reluctantly left the village. 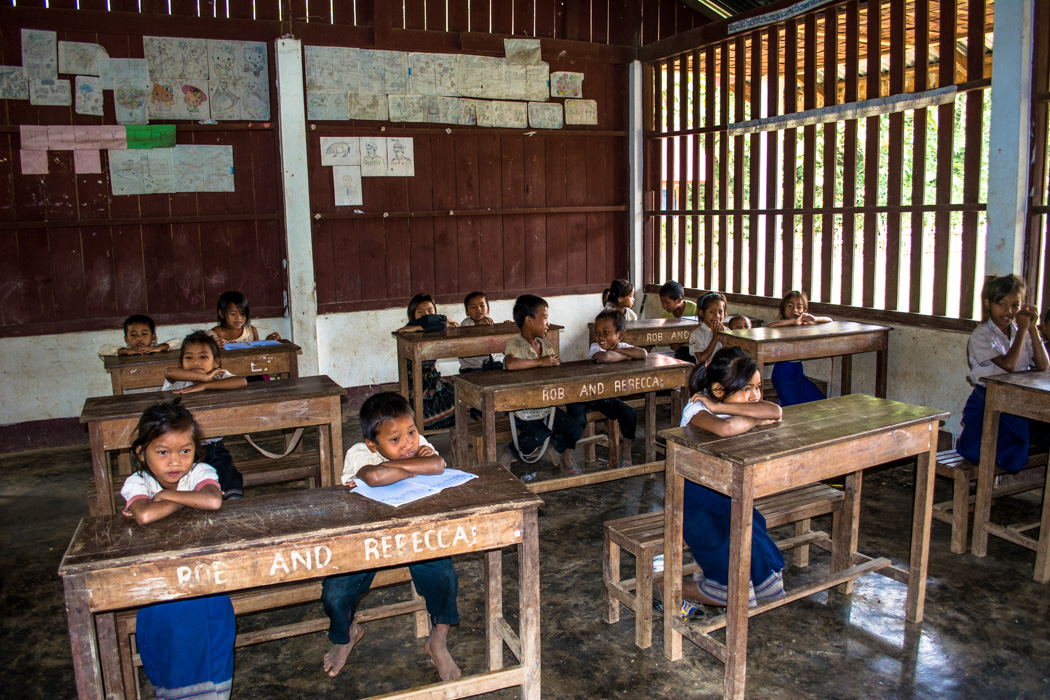 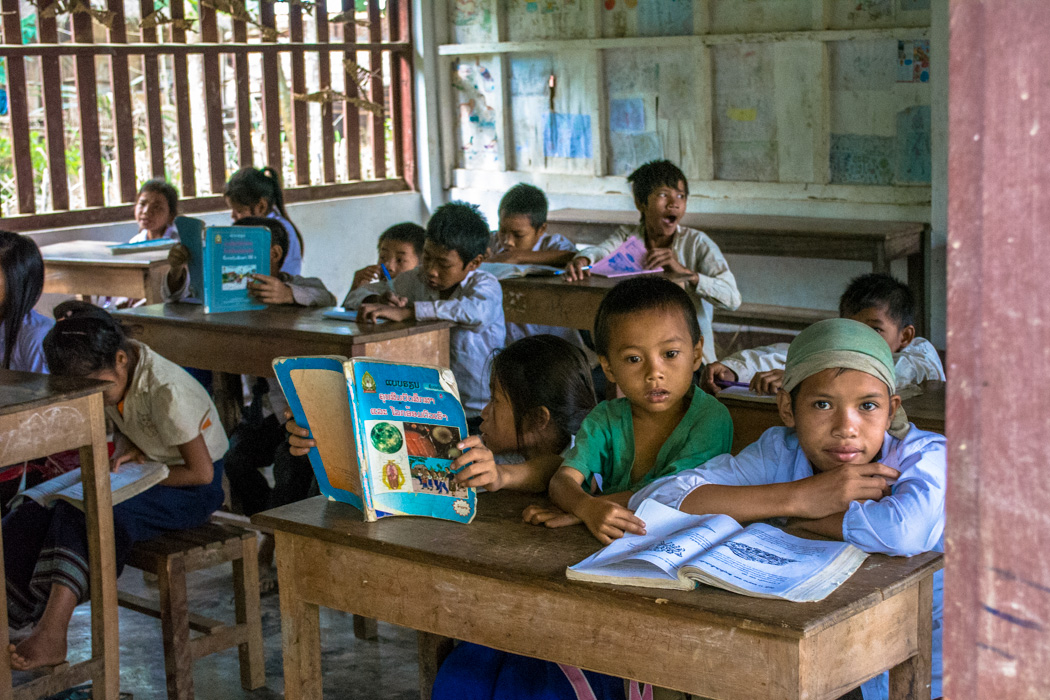 I’ve never been around people whose lives are so radically different from my own, and to say it was interesting would be an understatement. But, I really would have loved to spend more time there in a way that didn’t make us feel like spectators and them like a spectacle.

You can read more of Ashley’s travel adventures at travelerbydesign.com

and see tours at http://laos-adventures.com