Laos may not be a huge country, but its remoteness and rugged terrain mean that different regions, though they may not be all that distant from each other as the crow flies, can have different languages, different customs, and very different atmospheres. There’s a lot of good exploring packed into this one, green, mountainous country. One of my favorite Lao memories is of my first trip to Champasak.

Champasak is charming. There’s nothing to it–a boat landing for old rickety wooden boats that go from it to the town across the river, a strip of riverside hotels, a roundabout at the end of a long road with no traffic to actually go around it. These boats that bring you to Champasak, they’re in the shape of a long, shallow canoe, or sometimes two canoes with some planks on top, but they just shouldn’t work. They all leak, the boards are rotten and breaking, you can see water between the planks…and somehow, they ferry across motorbikes and hundreds of pounds of rice and multigenerational families plus livestock, with no problems. It’s as though gravity or physics or whatever is just ignoring this part of the world–or perhaps the Lao are ignoring them. Either way, it’s working. 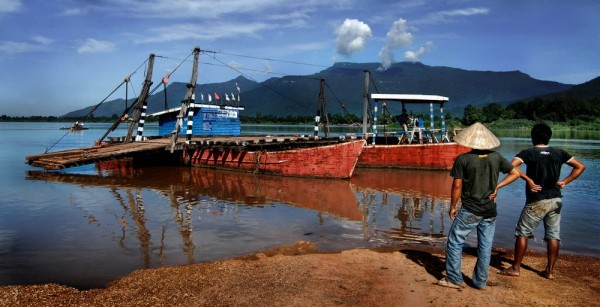 Photo sourced from Adventures of a Goodman

So Champasak is a road with a bunch of guesthouses along the river and some houses and shops down at one end, the river on one side and rice fields and humpbacked blue mountains in the background. We got there in the morning, dumped our stuff at a sweet little guesthouse (rooms $1.50–I doubt you could get that price now!) and rented two ancient bicycles to ride out to Wat Phou Champasak, the major thing to see in this area. We looked pretty swell on our little bikes, sitting straight up, legs bent double, dodging potholes, baking in the heat. 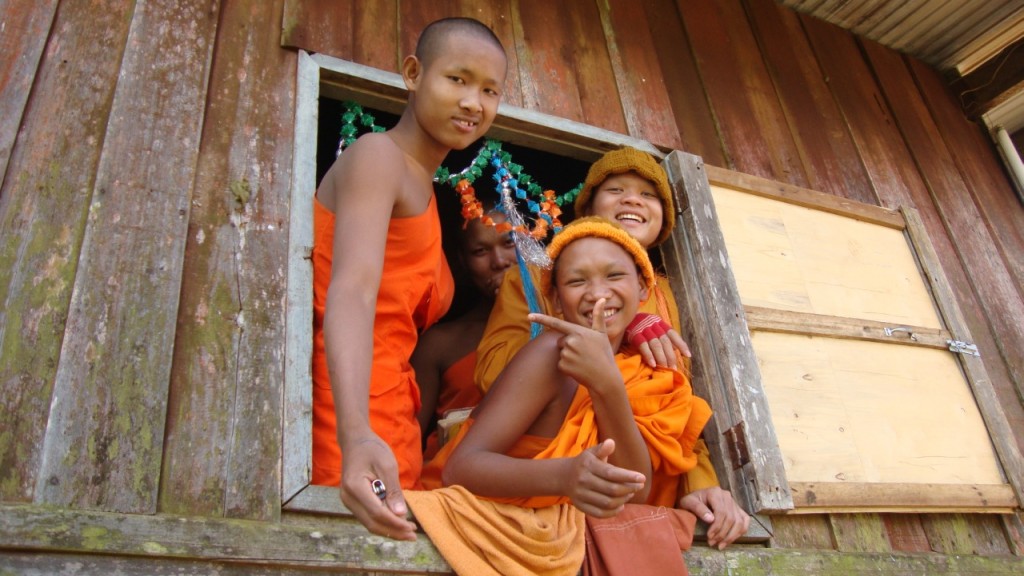 The wat is old, old, old. The Ankor period was from, I think, the 9th century to the 13th? The wat here was built in layers; the oldest structure is pre-Angkor; the other two are Angkor. The wat complex spreads out in three layers on a small mountainside, eventually petering out into steep rock and jungle. 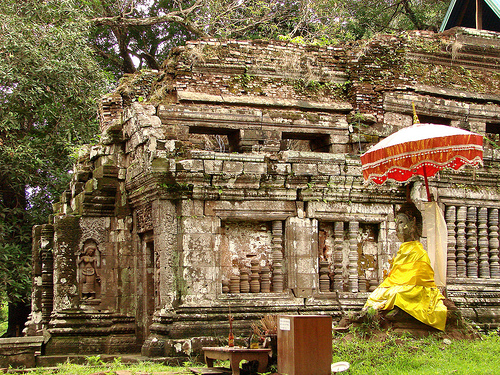 The scene is difficult to describe. You arrive and enter the ruins on a long straight dirt path, originally a long walkway into the bottom structure of the temple. On either side of the walk are plains of grass and rice, with mountains in the distance. At the end of the path is the first set of ruins: two overgrown, crumbling brown stone shells on either side of the path. The roofs caved in a long time ago, and the walls farthest away from the path are blocked by long grass and thorny plants, so you can only wander around so far without being blocked. The amazing thing is that even though the structure has crumbled, the carvings on the outer walls are clear and beautiful. The temples predate Buddhism, so there are pictures of Shiva and his…um, flying bull, I think. (I really need to do some religious study!) Some companions, anyway; Shiva and his various compatriots. The reliefs are just perfect, though the walls around them are crawling with ivy and leaning precariously.
You follow the path up between these two buildings and climb up steep brown stone steps to get to levels one and two. It’s not really more of the same, but my powers of description fail me. Brown stone, flowering trees erupting out of the stones, snakes, lianas, light and shade–it’s perfect. It’s hard to describe otherwise. The place feels exactly like what it must be. I don’t know if it comes from having seen pictures of Angkor Wat or having imagined temples in the jungle, but the strongest feeling you have, walking around, is something like,”ok, yes, this is right.” It’s like walking into a scene from your imagination. From the shady top you can look down and the ruins below, fanning out from the path. They look like sketches of what the temple compound must have been. It’s very easy to fill in the rest of the scene in your head.
It would be wrong to say the place feels surreal. Really, climbing those steep stone steps, touching the cool, porous walls, moving through the intense sun and the streaks of shade from the huge jungle trees overhead, you feel imaginary, temporary, unreal. The ruins, the mountain, the jungle; they’re real and solid and still. You may flicker over them like a projection, but they are what is actual. You are a fluke. An irrelevancy.

Perhaps I’ll give up on the deep analysis and just tell you what’s there. Old stuff, cool. Fallen Khmer warrior statues in the tall grass, rad. Huge boulder carved into an elephant in the trees just off the path, neato. Thick, red-brown stone slab with a man-sized crocodile carved into it, with deep pools cut out of the front part, where the croc’s front feet would be, used for human sacrifices, icky, creepy, awesome. I don’t know if there is a way to talk about running your hands over these things, lying in the jungle, these pieces of rock that were worth so much, that have lasted so long, that have been forgotten by humans but have not forgotten what they are. It’s something to see.
As we pedalled home, we passed a house (on stilts, the houses are all build above ground) under which some young men were gathered. The saw us and all started yelling and beckoning. We parked the bikes by the side of the road and wandered down the walkway to the house, where they sat us down and immediately began pouring us beer. It was a group of young men from the local Agriculture Office and their old boss. They didn’t speak much English, so we couldn’t be sure if this was a special occasion or just post-work drinking, but it was great. They all tried to talk to us, we practiced our Lao, French, and Russian–the languages we all shared a smattering of– somebody played guitar, and they poured as much beer and lao-lao into us as we could drink. Lao drinking is a little different from home–usually, everyone uses one glass. For lao-lao, the rice whisky, someone pours a shot into a glass, drinks it, pours one for the next guy; he drinks it, pours for the next guy, and so on. For beer, it’s half a little glass of beer at a time, on the same system. It’s really fun. And this is how people are here. In the small towns and villages, if people are eating or drinking, they will ask you to join them. They are the most hospitable, kind people I have ever encountered. And they like a drink. What a country.
Before starting our conversation about Viagra, let us mention some facts about ED. You will be surprised to find out that healthy sex life is more than great pleasure and ability to have children. It is the best and only way to guarantee natural training of the male heart, lungs, blood vessels and muscles. It is also the most efficient way of restoring male central nervous system. Normal sex life prevents the development of such severe diseases as stroke, heart attack, 买力士 high blood pressure (hypertension), diabetes, cancer, neurosis, depression, dementia etc. Now you know that men think the worlds of their erectile function for a reason!

You can buy Viagra in the nearest drugstore if you have a prescription from your doctor. It means, your awkward health disorder becomes public inevitably. Do not be frustrated! Fortunately, you can avoid any publicity at all if you choose to buy Viagra online. Our reliable online pharmacy will offer you top-quality pills from the manufacturer at the best price.

Attention! 买力士 Do not fail to see your doctor before ordering Viagra online! Use the lowest dose of the drug that works. Never overdose your ‘love pills’ – take only 1 pill about 1 hour before intended intercourse. Never take Viagra repeatedly within 24 hours!