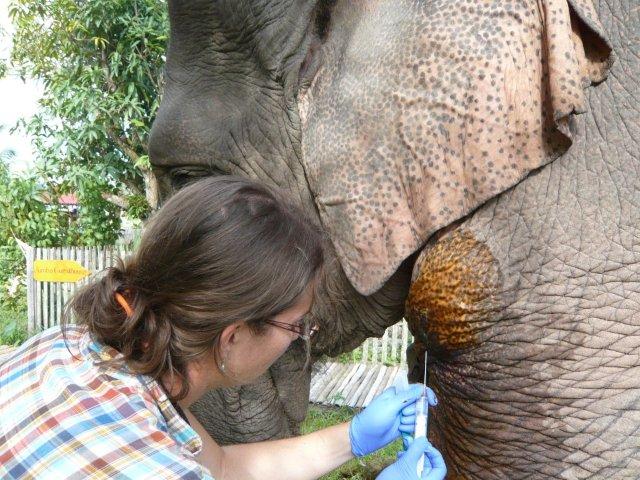 A Lao Elephant Adventure in HongSa

Cast of Characters: betadine, gauze, hope, trust, a bicycle, a scalpel, a very deep hole, and an elephant. 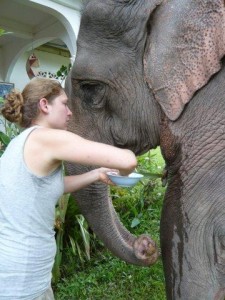 The rainy season has made lots of the roads in Northern Laos nearly impassible. Petra and Marlies could have taken a boat up the Mekong to Luang Prabang, but they wanted to get off the typical tourist route as much as possible…which is how they ended up elbow-deep in an elephant at Jumbo Guesthouse in Hongsa, Laos (or “the middle of nowhere”, as it’s often called). After all, when you travel to the middle of nowhere, wild things can happen…Petra and Marlies had always been fascinated by elephants, so they decided to take an elephant trek in Laos. Gentle Khamdy arrived the next morning, with her mahout—and a swollen, pus-filled abscess. The injury, the mahout told them, was a few months old. He’d tried to take care of it by applying some kind of healing tincture, but he wasn’t able to do anything else about it. Petra, the future veterinarian, said she’d take a look at the wound after the trek.

The trek was amazing, they agreed—they spend a long, wet, muddy day riding the elephants and, after lunch, trying their hand at being a mahout and attempting to control the giant creature themselves. 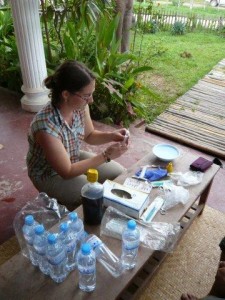 In the late afternoon, it was time for elephant triage back at the guesthouse. Monica, who runs Jumbo Guesthouse, has a well-stocked pharmacy for both humans and animals. (Out there, far from big towns, it’s good to be prepared!) She accepts donations of medicines from her guests and from professionals abroad, which she donates to poor villages in the region.

She wasn’t completely set up for an elephant operation, though, so Petra went on her bike to the pharmacy in town and bought some extra basics: gauze, Betadine, and other antibacterial agents to purify the wound. Luckily, Petra was traveling with medical scissors in her backpack (she’s not someone to mess with!), and Monica could provide a scalpel.

Fully equipped, they got to work. Marlies cleaned the wound with Betadine, while Petra injected the area around it with local anesthetic. During the procedure, the mahout sat on Khamdy’s head, giving her commands to stop moving and be calm. It was amazing to see the control he had over the giant animal, who must have been really worried about what was happening to her!

Khamdy got a bit restless when the wound first started to bleed. Petra said it was normal—“no animal likes to smell its own blood.” But she had to get deep into the wound to clean it. For the future vet, this was her biggest challenge—you don’t often ha 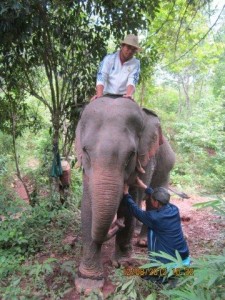 ve to stick your fingers deep into an elephant! But Petra was up to it. She opened the wound with the scissors and scalpel, the mahout controlling the trusting elephant the whole time. Marlies, Monica and Kham assisted Petra, all the while giving the elephant injections to clean the wound. It was a sort-of-scary, messy, exciting and sickening and wonderful event—not at all the thing you’d find on the beaten track. (Eventually the messy bit—the blood—got to be much for Marlies, who had to quit.)

Finally, they got all the pus and infection washed out of the wound. They knotted meters and meters of gauze and soaked it in liters of Betadine, so they could pack the wound with it.

After the wound was cleaned, packed, and dressed, Khamdy the elephant, of course, wanted to take the gauze out with her trunk and play with it. They had to trust that the mahout had enough control over his animal that he could stop her from pulling the bandages. Petra gave the mahout instructions about what to do to continue treatment. He had to keep the packed gauze in the wound for two days, to let it heal. After that, he could take it out and the wound could heal on its own. 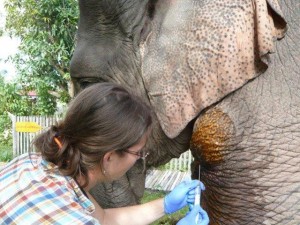 Petra, Marlies, Kham, and Monica disbanded the impromptu Mobile Elephant Treatment Center and parted ways with Khamdy and her mahout. A few days later, Monica got word from the mahout that he’d taken the packing out of the wound after two days and that Khamdy was happy and well. The future vet will have something unusual to put on her resume, the mahout will have a healthy source of income again, Khamdy will have her health, and everyone will have had the experience of pulling together, under unusual and difficult circumstances, to do some good.

(This story comes from Mrs. Monica, at Jumbo Guesthouse.)

If you like to join an Elephant interaction program or an Elephant tour in HongSa,
this one might just b e the right choice for you. An off the beaten track Elephant adventure in Laos!

The Tenderized Trap Ride for a good cause – Motorcycles in Laos