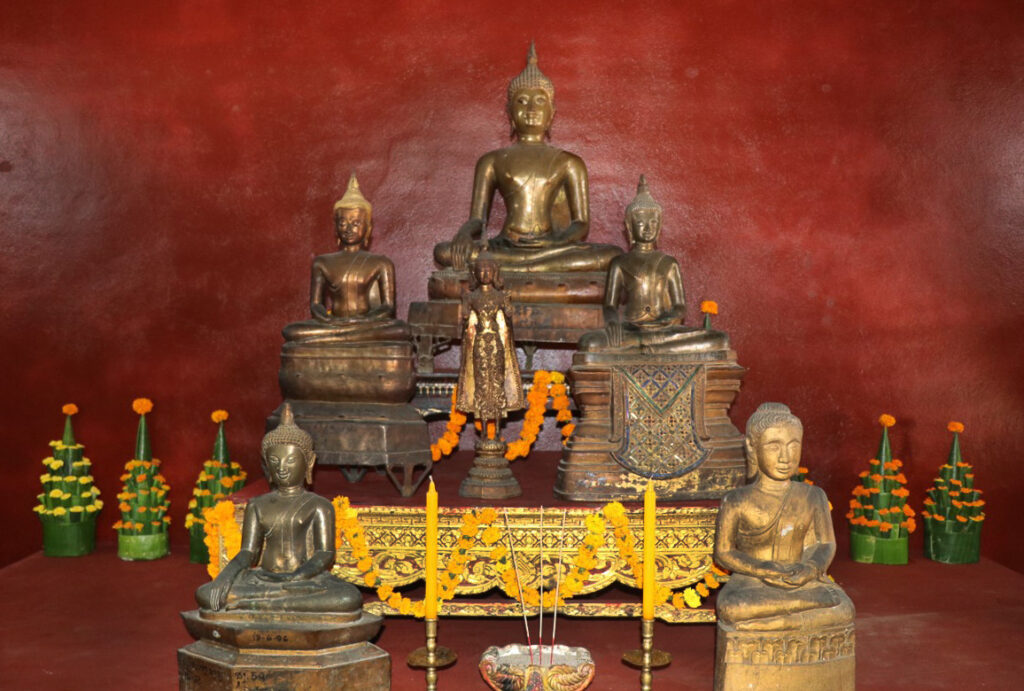 This article was published last year by Garland Magazine and we wished to share the art of floral offerings in Laos with you.

Linda McIntosh and Tiao Nith describe the floral offerings that are traditionally offered in Lao temples, which are changing now that they depend more on items purchased from markets.

The floral offerings presented to Buddhist temples, ancestors, and other spirits are a familiar sight for us living in Luang Prabang, Laos. Laos is a predominantly Theravada Buddhist country like its neighbours, Cambodia, Myanmar, and Thailand. Devotional offerings of ephemeral materials are common in these countries. Flowers, candles, and incense are the usual ephemeral gifts, and people of all ages present degradable sculptures to Buddhist temples and ancestor and animist shrines.

We also find these green sculptures as the focal point of phaa khwan altar trays in a baci suu khwan ceremony. A phithii suu khwan is held during weddings, new year festivities, to greet the arrival and departure of guests, and to send people safely on a journey. This ritual is also thought to heal an ill person or extend the life of an elder.

The former royal centre of Laos or Luang Prabang is a UNESCO World Heritage site enlisted in 1995 for its different architectural styles including religious buildings such as Buddhist temples. Today, the temples are active places of worship, and almsgiving and presenting offerings occurs daily. An iconic image of Luang Prabang in my memory is viewing the populace carrying offerings of a leafy sculpture decorated with flowers in heavily embossed silver bowls during processions accompanying the Phabang Buddha statue, the palladium of the Lao Lan Xang kingdom, to Vat Mai during Lao New Year.

Tiao Nith teaches that the ephemeral arrangement comes in two styles. The Central Thai structure was inspired by Hindu and Brahmanic arts and resembles a budding lotus. The other style is found in Laos, Northeast and North Thailand, and Tai areas of Southwest China. The form is a cone mimicking a mountain peak, which is the shape of a funerary reliquary (phathaat in Lao but also known as stupa and jedi). The phathaat represents Mount Meru or the centre of the universe in Buddhist cosmology.

We find two types of mountain-shaped offerings in Luang Prabang, the phoum and ton dauk mai or flower tree. A phoum may compose the apex of a ton dauk mai or may stand alone. The skeleton of a phoum may be the heart of a banana tree trunk, clay or wax with slender pieces of bamboo radiating from it. Its rounded cone shape is entirely covered with blossoms. The flower tree consists of the banana trunk and leaves to compose the central post, base, and ascending layers that shrink in size. A thin piece of bamboo the same height as the cone is inserted at the peak. Flowers also decorate the slopes and this pinnacle.

When Luang Prabang became a World Heritage site, green areas of ponds surrounded by coconut and areca palms still existed. Many home gardens were replaced by houses as the town’s population grew. These gardens previously supplied each household with fruits, vegetables, herbs, medicinal plants, and flowers. The fresh market provided any lacking item. Women sourced the materials for making the flower offerings from their gardens and the market. But, as the populace grew and the gardens disappeared, buying these ephemeral sculptures became the norm.

Making one’s own devotional offering earns the creator more merit or accrual of good deeds than buying one. The rules of creating these ephemeral arrangements include devotion, discipline, and meditation. Mere humans are not able to make perfect offerings, only deities can reach perfection. The devoted create offerings in honour of their teacher and deceased masters, including deities regularly. A maker strives for perfection through the choice of flowers and their symbolism. The size of an offering depends on the size and materials of the vessel it will be carried in. The ritual and the person making the offering also influences the type of devotional offering made.

Hans Georg Berger, a photographer who documented Buddhist traditions in Luang Prabang, interviewed the abbot of Vat Xieng Thong, the most revered temple of the former royal centre, in 1998. The abbot told him giving flowers was the most appropriate offering since flowers are frequently mentioned in Buddhist scriptures. Household gardens and trees provided shade for the town and fragrant flowers such as plumeria, jasmine, milkweed, and globe amaranth to compose offerings.

The Lao consider the frangipani, also called plumeria (Plumeria alba) or dauk champa in Lao, to be sacred. Dauk champa is the national flower of Laos. Champa trees are planted in temple grounds and other religious sites. Cape jasmine (Tabernaemontana species) or Buddha flower (Lao dauk phut) is appropriately named for use as a devotional offering. The flower of the giant milkweed (Calotropis gigantea) is called dauk hak or “love flower ” and resembles the Buddhist architecture feature symbolizing the lotus that the Enlightened One sits on. Buds decorate the bamboo stick rising from the summit of a phoum. Globe amaranth (Gomphrena globose) called immortal flower in French and dauk sam pii or three-year flower in Laos adorns a unique, Luang Prabang style arrangement. Blossoms cover the entire surface of a rounded, conical form.

Ephemeral creations created for pre-Buddhist rites, such as guardian spirits, ancestors, and master artisans, can include other coloured blossoms besides white, yellow, and orange that constitute Buddhist offerings. Some of Tiao Nith’s favourite blossoms are the flame of the forest or flamboyant tree (Delonix regia), Lao dauk fang daeng. The flowers of the Ashoka tree (Saraca indica) were once widely used to adorn an offering’s peak.

As the home gardens disappeared and the market becames the source of materials, marigolds, the colour of monks’ robes, became the primary flower used as decoration of devotional flower offerings. Tiao David (Nithakhong) Somsanith, a member of the viceroy lineage of Laos, is on a quest to revive the use of local flowers to make devotional offerings. He is the mentor of the Norphao, a group of youth committed to preserving Lao performing arts and crafts. Team members and interested members of the community are learning and, thus, preserving the making and meaning of devotional flower offerings. One of the challenges of reviving the use of local flowers is sourcing the auspicious-meaning blossoms. More people are admiring these beautiful creations, and we hope a little envy will compel others to make their own offerings with local flowers or buy arrangements made by the Norphao team.

About Linda McIntosh and Tiao Nith

Researcher and curator Linda McIntosh received her doctorate from Simon Fraser University, Canada, and Masters of Arts degree from the University of Wisconsin-Madison. She is the author of several publications celebrating the textile culture of Southeast Asia, including Art of Southeast Asian Textiles: The Tilleke and Gibbins Collection and Thread and Fire: Textiles and Jewellery from the Isles of Indonesia and Timor, and is also a contributing editor to Textiles Asia. McIntosh recently redesigned the Xieng Khouang Museum in Laos.

A descendant of the viceroy lineage of the former Lao Lan Xang kingdom, Tiao David (Nithakong, nickname Nith) Somsanith is a French artist. He grew up surrounded by the Lao courtly arts of painting, lacquer, embroidery, and flower and banana leaf arrangements. He completed a master’s degree from the Institute of Visual Arts, University of Orleans, and a PhD in Psychology from Sorbonne, France. Tiao Nith decided to return to his native land and devote his time to art and education programs for the community with the mission to preserve, promote, and transmit the cultural and artistic heritage of Laos.