Treehouses on top of the world: Zip-lining in Laos 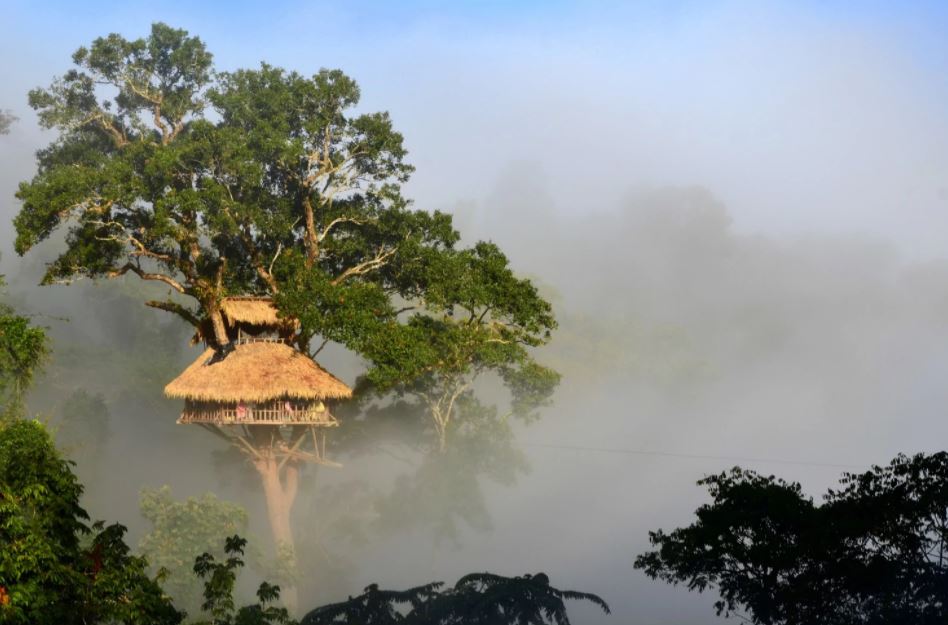 At the Gibbon Experience in northwest Laos, zip-lines connect some of the tallest treehouses in the world. (Felipe Rodríguez Vasquez)

During our honeymoon, my wife strapped herself to a steel cable, kissed me goodbye and threw herself off the side of a mountain. I watched as she disappeared into the jungle mist, leaving only her scream.

Then it was my turn.

I clipped my roller to the zip-line, took a running start and flew high above the canopy as the forest plummeted below. It felt like horizontal BASE jumping. The adrenaline rush turned into wide-eyed wonder as I burst through the fog and glided gently through the open window of a childhood fantasy: a towering three-story treehouse built 150 feet up in the branches of a mammoth strangler fig tree overlooking the rain forest.

Were Tarzan to dream up an eco-tourism adventure, it would probably look a lot like the Gibbon Experience in northwest Laos. During a three-day, two-night journey, you’re led deep into the remote jungle of the Bokeo Nature Reserve by guides from the surrounding hill tribes. After climbing up a series of twisting mountain trails, you “fly” over the rain forest on a heart-stopping network of zip-lines — some of which are suspended 500 feet above the forest floor and span more than six football fields. At the far end, you hike up again to continue crisscrossing the canopy on this sky-high superhighway. At night, you sleep in some of the tallest treehouses in the world — thatched, open-air observatories surrounded by panoramic views of the forest and a symphony of birds. The only way in and out of your airborne abode is via zip-line: You run off a ridge in the forest and gain enough momentum to soar in on one line, then jump out and let gravity carry you on another. Women from nearby Hmong and Lamet villages fly in your fire-cooked meals each night. Every morning, you wake up, slide on a harness and essentially toss yourself out of a 15-story building.

Not only is this exhilarating adventure one of the most unforgettable experiences in Southeast Asia, it’s also one of its most effective conservation concepts. As people from all over the planet swoop in to sleep and play high up in the trees, they’re helping to protect a critically endangered primate: the Laotian black-crested gibbon.

Due to decades of deforestation and illegal hunting, this sprawling nature reserve between Burma (also known as Myanmar) and Thailand is home to one of the last remaining populations of this rare creature. In fact, the subspecies was long believed to be on the road to extinction when Jean-Francois Reumaux, a French teacher with a passion for forest preservation, traveled from the Laotian capital, Vientiane, to the Bokeo region about 20 years ago. He spent a month living in the jungle and climbing trees to search for the elusive animals.

“I finally got close enough to film them, and when I showed the footage to anthropologists in Europe, they didn’t think it was real,” Reumaux told me over the phone. “So I told them they should come to the canopy and see the gibbons for themselves.”

Thus the idea for a sustainable monkey business was born. Over the next several years, Reumaux and a small team of local carpenters and climbers began building seven vertiginously tall treehouses linked by narrow footpaths and a 9.3-mile network of zip-lines — all within earshot of the gibbons’ haunting hoots. As backpackers started flying in, the organization convinced the Laos National Assembly to set aside the surrounding 525 square miles of rain forest as a federally protected nature preserve — an expanse that’s nearly eight times as large as the District.

Today, the project employs 142 canopy guides, cooks and treehouse builders. By offering villagers a more-lucrative alternative to poaching, logging and slash-and-burn farming, the organization has turned some of the gibbons’ former predators into their full-time protectors. The Gibbon Experience pays 25 armed forest guards — the only ones in Laos’s national parks — to patrol the rain forest and protect it against poachers.

Reumaux says Bokeo’s gibbon population has risen to its highest level in decades. Clouded leopards and Asiatic black bears are making a big comeback, too, he said.

I’m glad I didn’t know that last detail as my wife and I began our adventure by bumping along dirt roads in the back of a pickup truck with five other backpackers. After a two-hour drive through the jungle from the Gibbon Experience’s headquarters in Houayxay, we arrived at the Hmong hill tribe village of Ban Toup, where we met our guides, Phad and Si, who gave each of us a safety harness, zip-lining gloves and a warm Beerlao.

“It’ll taste better in the treehouse,” Phad joked. Soon, we were off, but not before Phad’s extended family came out of their thatched huts to hug him goodbye and see us off with shy smiles.

We hiked into the mountains and were quickly engulfed in a riot of twisting vines, studded palm leaves and massive banyan trees. Two hours and one banana-leaf-wrapped baguette lunch later, we couldn’t climb any higher.

The extended family of Phad, center, a guide, assembles to wish zip-liners well on their journey. (Eliot Stein)

“Who wants to fly?” Phad asked.

My wife shot up her hand. After a crash course in how to zip — legs up, lean back and squeeze the strip of worn bicycle tire that serves as a brake — she was gone, tearing at 40 mph through the canopy and losing her baseball hat in the process.

Just as I strapped in and prepared for my first flight, Phad whispered one more helpful hint to me: “Don’t look down.” It turns out that, despite five years of professionally soaring through the sky while dangling on a wire, Phad is absolutely terrified of heights.

“I always close my eyes,” he admitted. “But you should be okay!”

I was, until I shot a glance downward and caught sight of my tiny shadow racing across the treetops hundreds of feet below. I screamed as loudly as I could until I sailed safely into Si’s arms on the far platform.

The only way in and out of the treetop abodes is to fly through the forest on a zip-line. (Felipe Rodríguez Vasquez)

Ten 500-meter trust falls later, our group was perched in the branches of our nest for the night, each quietly admiring the architectural marvel. Never mind the rooftop solar panels, suspended bedroom balconies and sweeping 360-degree views, the highlight of our sky-high home was hidden behind a curtain in the bathroom: an open-air shower where cool rainwater shoots down from the ceiling, washes over you and then drains through wooden floor slats and falls 150 feet into the rain forest below.

About two hours later, as the sun was beginning to set, we heard a faint howl in the forest and perked up. Gibbons? Nope — room service.

Two women wearing embroidered hill tribe dresses were flying in our fire-cooked dinner. While one woman spread a platter of mushrooms, chicken and cabbage on the living room table, the other strung mosquito nets over our mattresses and duvets.

“Your bedrooms are ready,” she said quietly, before plunging off the first-floor platform and disappearing into the dusk.

We ate on squat stools and swapped travelers’ tales while nursing our warm Beerlaos. Long after the feathered chorus of bulbuls, drongos and kingfishers had quieted and there were no more card games to play, we retired into our net-covered mattresses for the night to listen to the chirping cicadas and mysterious squawking that lay just beyond the reach of our flashlights.

It’s hard to oversleep in the jungle, especially when your home sways ever so subtly in the breeze. Phad and Si swung in just after dawn to lead our droopy-eyed group through a series of bamboo-lined trails. When we landed back in the treehouse, breakfast was waiting for us in the living room. In addition to rice, stew and piping-hot coffee, there were fresh omelets made from the bag of eggs that Si had carried as he tore through the forest the previous day, never cracking a shell.

We whizzed across 11 more zip-lines on the second day — some more successfully than others. Whenever gravity left us dangling short of the far platform, we’d each have to turn around in midair to pull ourselves, arm over arm, toward land while the rest of the group cheered: “C’mon, monkey!”

Between flights, Phad led us quietly through the dense bamboo groves in hopes of spotting wildlife. As Si silently dug up clay-colored roots as part of our lunch, Phad pointed out sambar deer tracks and matted paths made by wild pigs.

But what of the elusive gibbons? “They’re very hard to see,” Phad admitted while he and Si boiled the roots to make eye­poppingly strong “jungle tea” in the treehouse kitchen. “Much easier to hear in the morning.” One of the real stars of the show, a male Laotian black-crested gibbon, climbs a tree in the Bokeo Nature Reserve. (Felipe Rodríguez Vasquez)

On our final day in the forest, our patience paid off. With dawn burning off the early-morning mist, an eerie, ascending whooping sound echoed through the canopy and jolted us out of our mosquito nets. We leaned over the treehouse railing, quietly scanning through the clouds to find the source of the distant siren call.

Finally, there was a response. Somewhere, deep in the jungle, a second gibbon started hooting back to the first. We listened, completely captivated, as the back-and-forth notes blossomed into a duet.

“They’re singing to each other,” Phad said. “Husband and wife.”

Just as soon as the song started, it fell away. We never did catch sight of the gibbons. By the time the mist cleared, they were long gone, swinging away together through the trees.

Stein is a Berlin-based writer and guidebook author.